A field and footpath away 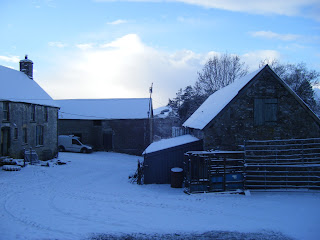 It had been snowing for a week. It was so cold that the mug of water Arn kept next to his bed froze solid and for the first time in twenty years he lit the open fire in his room. The chimney caught fire and four jackdaws, having sought refuge from the chill, spilled out of the fireplace and flapped frantically. They were condemned to smoking carcasses as Arn extinguished them with a beating poker. The doors froze stiff and the poachers could only escape through a window. The smell of dog excrement became so unbearable Reg took an axe to the back door and fashioned a crude pop hole for the canines. One morning they woke to find a four foot snow drift through the kitchen. The arrowing wind had ripped the plastic sheeting from the window frame and had ushered it in like an enthusiastic estate agent.
The poaching larder was as stark as the landscape. The white background made camouflage impossible. Arn passed the poaching hiatus by constructing a series of snowmen around the fields of Foxley. His masterpiece was a seven foot sculpture to represent his giant of a friend Drim Dram Macintosh. He wedged an oak branch high way up to represent his colossal penis.

A week before Christmas the snow ceased. Two days later when patches of grass began to reappear slowly in the fields, Arn had to make a very difficult decision about his Merlin hawk, Ozzie.

He had kept Ozzie captive far longer than the Merlin’s improving health had warranted. His skill and tenderness had aided a full recovery from a broken wing, but he constructed a mountain of excuses for not releasing the bird back into the wild. The bout of Arctic weather had come as a godsend to Arn, but further increased Reg's contempt for the bird. The weight of snow had buckled the roof of the tiny shelter and the only place of refuge for the hawk was within the house. Arn pulled the drying rack from above the Rayburn and clumsily screwed it into the corner of his bedroom. A pyramid of droppings and garden bird remnants had grown steadily beneath.

The hawk had been free from the glove many times before, but always returned to Arn's pathetic cries and the tasty morsels frantically waved above his head. He didn’t want to release the hawk and it was testament to his affection that he housed it in the corner of his bedroom. In the middle of the night he would wake and whisper, “Ozzie, Ozzie,” into the corner of this room and be met with a dozy purr from the hawk’s throat. He’d then drift off into a world of dreams and imagine himself on the back of a giant Merlin, floating over the hills and bearing down on a vast expanse of ring fenced trees.

Reg disliked the hawk because to his mind they were closer to witchcraft than any cat, bat or frog. He disliked it being in the orchard with its all seeing eyes spying on things nobody was meant to see and he saw Arn’s decision to shelter it in the house as an affront to his authority. Unknown to Arn, Reg planned to pull the hawk's head off on New Year’s Day. The thaw saved the decapitation.

Arn chose Christmas morning to set his hawk free. While a poached goose sizzled in the Rayburn he shot a house sparrow off the bird table to bolster the hawk’s energy over the first days of freedom.

Ozzie screeched its usual greeting, but Arn didn’t answer back. It walked onto his glove and fanned its wings, tilting its head and looking into Arn’s bottomless stare. He held the gaze until he could look no more and took the hawk on its final walk. Arn's regal English game cockerel was studying the rarity of grass in the orchard as Arn wandered by. The cockerel had puzzled over the hawk ever since it tumbled out of the sky and scattered a flock of thrushes over the breath of the orchard. The cockerel had frequently strutted down to the little shed that housed the hawk to listen to the ruffling and calling from behind the door. Arn loved to see creatures interact and studied their reactions closely, recording the emotions in a pale yellow notebook bound with string and crammed with knowledge.

He climbed the stile opposite the house and moved out into the middle of the field. The hawk recognised the routine and jogged on the glove.

“Sling it then!” Reg yelled out. Hawk and handler looked over to the stile.

“Aye, aye,” Arn returned, calming the hawk with the fingertips of his naked hand.

The world glowed as land met sky in a sfumato of white. The sun was a milky blur. In a desperate need to feel the birds claws Arn swapped the hawk from the glove and allowed it to perch on his bare skin. It scratched the rough flesh, smattering blood on the crystal snow. Arn watched the blood trickle over his boots as he untied the ring from the scaled leg and without warning hurled the hawk into the sky.

It was weightless; spanning its delicate wings it flicked against the hostile air and made for the stile. Reg stepped onto it and raised himself up, causing the hawk to veer away with rapid wing beats and it came to rest out across the field on a bare gate post. It screeched across the field to Arn, but he made no response. The hawk's eyes were glued to his jacket pocket; the larder from which many delights had been produced. Arn opened his lips to call, but checked himself and wiped his hand across them, streaking blood in two wavering lines. Both waited, expecting the other to make a move. The hawk picked a line of dirt from a groove on its leg, ruffled its feathers then made a crow fly for another post. Arn moved backwards, leaving two footprints and the smattering of blood as the only evidence of friends departed. The hawk spotted his move and spun in the air heading for his glove, but he dropped his hands and signalled no rest making it shoot upwards and barrel roll back to the post. As he reached the stile it began to snow once again. He looked to Reg with a furrowed brow.

“Best call him in, eh?” Reg’s eyes froze in the cold. Arn squinted through the flakes and struggled to see the hawk, but it was having no trouble in watching the hedgerow fifty paces from the poachers. It bobbed its head and flicked off the post. Dipping low to the ground with its flecked underside kissing the snow it raced up to the hedge fanned its wings vertically and slammed into a hawthorn bush. It tumbled into the snow breathless, shaken, but triumphant. A plump robin was pierced onto its claws, the fire red breast burned against the white snow.

“Superb,” Arn whispered, producing his notebook and Reg nodded in acknowledgement  but tempered it with thoughts of black magic. They moved away in silence allowing the hawk to feed in peace. After feasting it sat on the stile in the falling snow and watched Orchard House for the entire day until the night sucked the light from the sky. On the second day it called, on the third it pined and on the fourth the snow stopped.
On New Year’s Eve as Arn sped his mini van round a tight corner on the lane to the house, a Merlin hawk chasing a chaffinch, tore up and over the high hedge at great speed. He stood on the brakes, but the van skidded on a sheet of black ice. The chaffinch flicked the wing mirror and the Merlin dashed across the bonnet.

Ozzie was buried in a frozen, shallow grave on the first day of the New Year.
Posted by Unknown at 15:59