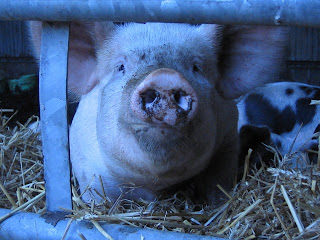 My favourite dish, like, ever. Pigs brain is a much daunted and under used piece of favoured air loveliness. It is as equally foot tapping when fried on a piece of toast or as part of this salad melee. Calves brains are prevalent on British menus and lamb's brains form the think tank foundation of many Middle Eastern and Turkish restaurants, but poor piggy is left out in the cold. So let’s bring him back into the heat...
Lamb's heart is the finest part of a sheep. This is not just my opinion. I saw God on the bus the other day and although he didn’t say much he did definitely make that statement. The little pump organ combines the taste of shoulder with the tenderness of fillet. Diners get all squeamish when offered the choice of heart. But once it has been sliced and seared and is unrecognisable to the thing on the front of a fancy card, then all is forgiven and the plate is cleared.
The brain is easily scooped out of a halved head with a spoon, though unless you have a piggy at the bottom of the garden then the butcher would have already done this. Select a couple of hearts, as when you start eating you’ll rue the fact that you only cooked one. Butter is best to cook the offal in because it really aids the flavour. Melt a knob in a hot pan and add the brain. The thought gadget of a pig has a fun texture. Many foods that are cast into heat at least move or shrink or open a window, but old piggy just laps it up. Brown one side with a twist of salt and pepper, then flip and brown the other. When you have gained equal colour, add the sliced hearts. A heart should be sliced from wide top to bottom point. Don’t worry about the capillaries, just slice and add. The brain needs to be cooked through but the hearts can be eaten anyway between bleating and coffin. If you require that the hearts be weeping red, then cook the brain for a touch longer.
Pretty much anything can be selected to fashion the make-up of the salad, but one rule for this dish is that you want to add some bounce. This allows the brain and hearts to airate and not create a pool in which the greens go sage. A mattress of lettuce is a good foundation onto which non molested spinach and chicory or chard would be a good addition. A few well spoken leaves of mint are a sly choice to flirt with the lamb, but not too much, else piggy gets waspish. Don’t ever use the supermarket stuff; it’s a waste of the factory lights ‘they’ used to grow it with. Tomato is sound, parsley is not, neither is pepper: roasted or raw. Watercress gets a nod, but he can’t bring his mate cucumber etc etc. I trust you to find the right mix. If you don’t, I’ll come round and disconnect the modem. A dinky teardrop of lemon juice will hurt neither brain nor heart and if you really want to show off to your mum, plop a teaspoon of horseradish on the side. Yeeow!
When the offal has cooked to one’s liking, drain off any butter and seeping juices and let it cook dry for twenty seconds. Crisps it up, innit.
Donk piggy in the middle of the salad odyssey and scatter the heart ribbons liberally. Drink with a deep, dark ale. You’ll see why.
Your head says no, your heart says maybe, but your belly says good work.
Posted by Unknown at 15:58