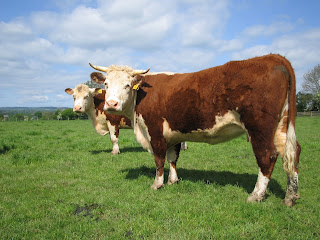 As an esteemed life comes to an end another begins. Queen Aria the 6th, the oldest cow at Llanevan, made the final trip to Alton Towers today. Although she had been chewing at the cud to go for some time, it was still a wholly emotional send off. After she had finished her last supper of wild garlic on toast washed down with a glug of Campari and gin, she took one last wander of the meadows that had been her home as a calf, a maiden and an old slugger. The cattle herd had formed a guard of honour either side of the tailboard to the trailer and the Queen stoically shook hooves as she boarded.
“Be good in my absence, my girls,” she bid and threw a bouquet of meadow grass which, touchingly, her daughter, The Weiss, caught.
“Bye, bye mummy,” The Weiss said and the other cows led her to The Suspicious Finger to get well and truly kazamed at the wake.
Queen Aria the 6th had been uplifted before her departure with the news that her carcass would be going to the celebrated Barrica tapas bar in Goodge Street, London. She’d always shown a touch of Catalan flair and so I thought it was fitting that that is where she should end up.
“I’ve never been to London,” she revealed to James Johnston.
“You have got the grand tour now sweet teats. Above and below ground.” He’s good with words is our James.
Recently I have had a surge of interest from the chefs for meat at the other end of the spectrum. They are keen to get their hands of some really good veal. Some pink bovine infantile meat that would make Zeus put down his thunderbolt and pick up his fork. But it’s something that I, perhaps hypocritically, shy away from. In culinary terms I don’t see the fad. Why eat young beef when you can have the tip top downright funkadelic punk of a rump from Queen Aria? The kind of meat that has been hocked around the meadows for generations soaking up over a decade of flavour and when it is brought to your plate you hear God take his own son’s name in vain? I guess I am getting soft in my simple age, but when a calf is born it is the personification of innocence. Pink wet nose, moon marble eyes, ears erect in instinct sat atop a fluffy white face. Awwwwwussies. They don’t know any better, huh? They are young and free and socialist straight from the womb. Who would want to put a cap in that ass? Not I. Not James Johnston. And he is the boss.
Hypothetically, three months would be the exact time to sharpen the knife on the little munchkin. At this point they have been bolstered by mother’s milk and are two months down the grazing line sweetened by the tiny grass seeds made flush by the spring and early summer sun. Blimey, that does sound good.....
No. Never. Let them play, let them gambol, let them listen to Justin Bieber for God’s sake, we had New Kids on the Block and no one killed us for that. Did they? My policy is that a cow has to kick me at least four times before it is considered for slaughter. By this time the rose tinted veal specs are off. (Just for the record Queen Aria the 6th never kicked me, but she had some acutely savage put downs). Cattle should grow big and ugly and impetuous before they get a pass to Alton Towers, then at least they have lived some of the precious life that only they will experience. A cow should munch through at least three summer’s grazing. In my opinion that is long enough for them to discover Pink Floyd’s Dark side of the Moon and once they have achieved that they are ready for the afterlife. Plus, of course, they have laid down some serious flavour into the muscle. A chef friend’s signature dish is to braise a calf in its mother’s milk. Apparently it tastes like heaven, but I wouldn’t touch it no matter how damn umptuous it tastes. It’s like drowning a puppy in slush. Raspberry flavour.
When I returned from Alton Towers today I discovered that UK 721284 400081 had given birth to a startled baby heifer. She has named her Smashie Backlift in honour of the finest West Indian batsman to play the game of cricket. To see a new calf raise itself off the ground and take its first tentative steps under the influence of instinct towards the tit is as rewarding as finding a fiver under the sideboard.
So in the next few days after Smashie Backlift has come to terms with the revolving ball that she has been brought into, I will impress on her that she has a long life ahead. And who knows, if she doesn’t kick me, she may well live forever. Well at least until she’s fourteen.
Posted by Unknown at 12:57