There's only one place for snow.... 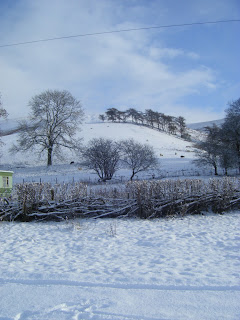 Sheep are great this time of year; to eat that is. The most recurring question I am asked is, "But don't you feel sad when you take them slaughter?"
"Not after you've worked with them for more than a day."
They were put on this earth to torment me. They regulary gather in groups to whisper behind my back and take great joy in discovering holes in fences and absconding onto the neighbouring farmers land, but I always have to remember, on the days I am chasing them around the fields, that it is all worth it in the end; because they do taste bloody good.


Overnight Mutton Shoulder
Mutton is the meat from a sheep over two years old, though the best comes from a ewe that is at least six. I have a ten year old ewe. She will be divine.
"I'll be tough as old boots," she continually tells me.
"Not if I cook you overnight."

One shoulder of Mutton (ideally hung for two weeks)
1 big ol' onion
2 handfuls of mushrooms (standard hands)
Tin of prunes in the juice
Two glugs of chili sauce, the orange West Indian stuff (like what the Buzzard was using)
Two each of winter vegetables. (I say Parsnip, carrot and butternut squash for colour variance, ahhh)
Four fresh tomatoes
Quarter of a bottle of wine (drink the rest while you prepare it)
Pint of spring water (but only if you have it flowing past the house, or if you are massively pretentious)
Salt and pepper

Don't muck about with this. It should only take the time to drink the wine, to prepare. Grab a bowl and crush the tomatoes into it by hand or fork. Glug in the chili sauce and the wine and the pint of spring or mains water. Add the prunes. Stir her up. (If you have some dried basil and thyme lurking in the back of the cupboard you can add a sprinkle of both). Get a metal roasting tin big enough to fit the shoulder in. Bonk it on the hob on a steady heat. Add oil. When it is hot (test by sight not finger) place the shoulder in and brown on both sides, twisting salt and pepper to cover the skin. When she's done take her out for a mo. Add chopped onion and mushrooms to the oil. Stir them for no longer than a minute. Place the shoulder on top of them. Add rough chopped raw vegetables. Add the bowl of goodness so that the shoulder is covered, but do not worry it it protudes from the mixture. Simmer over the heat for half an hour while the oven preheats at 150 or gas mark three or, if you have a woodfired Rayburn, two bloody good logs. When the half hour is up, whack her in. Cook for twelve hours overnight. Just before you go to bed and first thing in the morning you can turn the shoulder over in the enriching stock. A fork should easily sink into the meat as it falls off the bone, if it doesn't, then return to the oven until it does. When done rest for half an hour.
Before you tuck in, take a picture and mail it to my ten year old ewe. She'll love it.